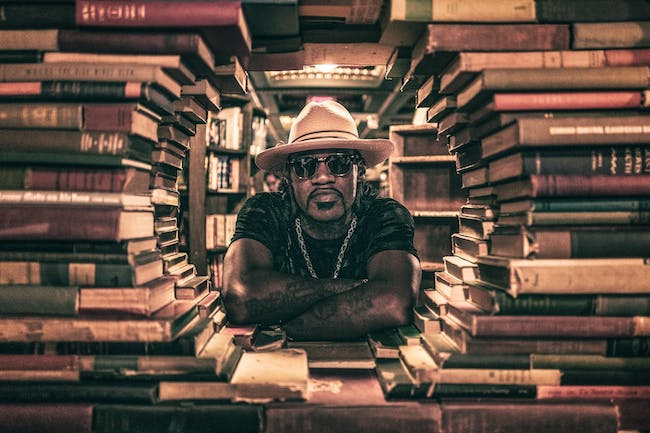 ****PITTSBURGH -- Due to circumstances outside of our control, we regret to inform you that ERIC GALES has been postponed until further notice. Hang on to your tickets, we’ll email you (and post updates here) as soon as a new date is announced.***

Growing up in a religious household, his brothers Eugene and Manuel used to blast out Jimi Hendrix, Cream, Muddy Waters, Blue Cheer, Albert King, John Lee Hooker, King’s X and Stevie Ray Vaughan. Whilst their mother was at church and little Eric was aged just 4 , he was soaking it all up and this is where he had his incredible grounding of blues, hard rock and psychedelia. Naturally right handed, Eric learned his distinctive left handed upside down playing from his older brothers Eugene, his ‘mentor’ and Little Jimmy King, who was later adopted as Albert King’s godson.

His talents caught the eye of Elektra Records, who released his debut album The Eric Gales Band in 1991 when he was only 16 years old. The band was made up of Eric, his older brother Eugene and drummer Huwbert Crawford. Picture of a Thousand Faces followed in 1993, then Manuel Gales (aka Little Jimmy King) joined his two brothers for 1995s Left Hand Band as The Gales Brothers. Over the next few years he worked on varioud projects including performing as Lil E with Hip Hop collectives Prophet Posse and Triple 6 Mafia.

In 2009 he spent in jail serving at the Shelby County Correction Center in 2009 for possession of drugs and a weapon. Talking about this he says; “While I was in there all the officers and guards were like, ‘bro you know this isn’t where you’re supposed to be. When you get out of here, go take the world by the horns and ride it all the way out.’ It took a couple of years after but, I’m here.” Whilst he was incarcerated he was able to play shows, for the Mayor, the city and festivals, his own version of Johnny Cash Walk the Line.

The all instrumental ‘Ghost Notes’ (Tone Center Records) came in 2013 along with ‘Pinnick Gales Pridgen’ (Magna Carta). The latter was a collaboration with dUg Pinnick (Kings X) and Thomas Pridgen (Mars Volta, Suicidal Tendencies) and the sequal come in 2014 with another fusion of psychedelic blues, hard rock and progressive soul/R&B. He then released ‘Good for Sumthin’ in 2014 (Cleopatra Records)in addition to live album ‘A Night on the Sunset Strip’ (2016).

As a renowned guitarist he has performed with: Carlos Santana at Woodstock in 1994 and in July 2016, Zakk Wylde who also appeared on 2014s Good For Sumthin’ and Eric Johnson who also appeared on the same album. He also toured as part of the Experience Hendrix tour with legend after legend including Bootsy Collins & Robert Randolph and has also collaborated with Lauryn Hill many times.

During the Experience Hendrix tour he had the opportunity to hold his own against some of the greatest guitarists in the world. “The tours were a great experience, but what ultimately what that done for me is to help me make me get myself together. So, I can go out and pack out those venues myself, that other guitarists on that tour were packing out.”

“I try to push myself as hard as I can, especially live, it’s like an extreme work out for me, it’s like something else takes over. When I hit the stage, some other person is on that stage for some reason, I’m there physically as a witness, but mentally it’s another person.”

In 2017 Provogue/Mascot Label Group released ‘Middle of the Road’ which he describes as his “rebirth” following issues with drink and drugs and had collaborations with Gary Clark Jr., young guitarist Christone ‘Kingfish’ Ingram, Eugene Gales and Lauryn Hill.

‘Middle of the Road’, was released in February 2017 and reached #1 on the iTunes Blues chart and #4 on the Billboard Blues chart. In the UK it made Classic Rock Magazine and Total Guitar albums of the year with the latter saying it was “the album that should define his career.” Classic Rock said “the notes drip from Gales’ fretboard like warm honey”, The Guitar Magazine exclaimed it’s the “the injection of danger and unpredictability that the blues-rock scene desperately needs”, Blues Matters professed “truly the man is blessed”, whilst Powerplay said “the more you listen to it the more the brilliance of Eric Gales becomes apparent.”

Since then he has toured almost non-stop; playing shows with Gary Clark Jr., Beth Hart, Gov’t Mule and called through Australia, Argentina, Chile, US and Europe - including the Rockin’ The Blues run with Gary Hoey, Quinn Sullivan and Lance Lopez. He played his first ever headline tour in the UK and Ireland to sold out crowds, took a starring role as part of Supersonic Blues Machine at the UKs Ramblin’ Man Fair and also found time to play a one off reunion show as The Eric Gales Band. This is not to mention his collaborations with funk royalty Bootsy Collins (‘World Wide Funk’), The Apocalypse Blues Revue (Shannon Larkin/Tony Rombola of Godsmack) and Supersonic Blues Machine (‘Californisoul’).

It’s no wonder why he is the guitarists’ favourite guitarist, counting fans in the likes of Tony Rombola (Godsmack), Tosin Abasi (Animals as Leaders), Joe Bonamassa and Carlos Santana. Dave Navarro (Jane’s Addiction) said “how Eric Gales isn’t the hugest name in rock guitar is a total mystery” and Mark Tremonti (Alter Bridge) also claimed “this guy could be the best player on Earth.”

Gales proudly tells his story every night before every show, now over two years sober he is creating some of the most breath-taking music he has ever made. Talking about his approach to song writing in this time he reflects. “I guess the songs would answer the question more or less, I definitely don’t have anything clouding my view and it’s definitely a much more pure place its coming from.”

In December 2018, he annouced that he will be releasing his new studio album ‘The Bookends’ (Provogue/Mascot Label Group) on 8th February 2019. The album was recorded with Matt Wallace (Maroon 5, Faith No More, The Replacements) and features collaborations with Beth Hart, Doyle Bramhall II and B. Slade.