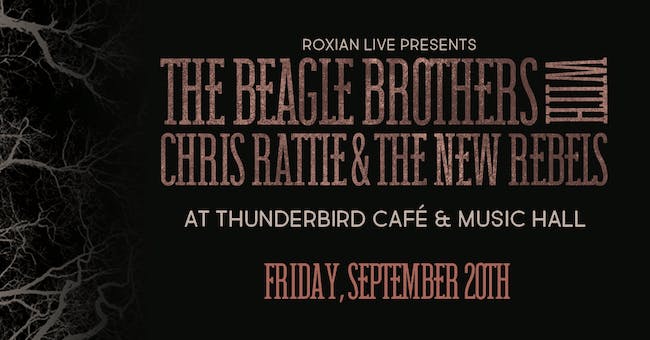 iCal
Google
** 21+ SHOW unless accompanied by Parent or Legal Guardian **

The Beagle Brothers with Chris Rattie & The New Rebels

** This show is 21+ unless accompanied by Parent or Legal Guardian**

Buy your tickets to The Beagle Brothers with Chris Rattie & The New Rebels today!

As luck would have it, the Beagle Brothers have been Pittsburgh's premiere country band for 13 years. They are the foundation of the "Bloomfield Sound," which mixes honky-tonk and classic country with an accelerated, high energy performance. In 2012, they were featured on the cover of the Pittsburgh City Paper, to celebrate the release of their 4th album, "Dancers of the Drunken Two-Step." In 2014, they became the house band for Groundhog Day in Punxsutawney, PA and released a benefit 7" single on Mind Cure Records, with all proceeds benefiting WQED and the Fred Rogers Company. They returned to Punxsutawney in 2015 as the house band, where they were featured and lampooned on Comedy Central's "The Daily Show" as "Punxsutawney's Zac Brown cover band." In addition to releasing 3 7" singles in 2015, they were honored by the City Council of Pittsburgh with a proclamation to name December 12th 2015 "Beagle Brothers Day". Their latest album "Hearts Go By" arrived in 2017, which saw the band expanding their country rock sound to include a drummer for the first time. They have shared the stage with David Allan Coe, Reverend Horton Heat, and Wayne Hancock, as well as headlining performances for the Commonwealth Press Beer Barge and Pittsburgh's annual Johnny Cash Day.

Chris Rattie blends country’s aching ethos with a keen eye for the future. He rises out of the muck and mire to be one of today’s most riveting, astute storytellers. The singer, songwriter and musician wraps his Steve Earle-wrinkled voice around tales of self-realization and wonder on his latest album. Porch (released Sept. 15) is steeped in frothy Americana, burnt around the edges with electric guitar and honest, godforsaken songwriting. “I’ve been out all night long singing these heartbroke songs. Ain’t nobody listening,” he sings on “A Little Shot Glass from Spain.” Later, he pontificates “Country Boy” tropes, fed with a provocative spoken word intro. “Country boy drives a big red truck. Loves rolling coal, it makes him feel real tough. Rebel flag stuck on the back,” he wails over smokey guitar lines and a honky-tonk rumble.

Porch is as much a masterful creative accomplishment as it is a raw recollection of his tireless journey to get there, the culmination of years of blood, sweat and tears. A native to central Pennsylvania, he cut his teeth as drummer for Vince Welnick of The Tubes and The Grateful Dead, drummer and prominent songwriter in The Rustlanders (whose second album was helmed by producer Don Was and recorded in L.A.’s East West Studios), and vocals/drums/guitar in rock band Marah. The experiences wrought invaluable wisdom, bestowing upon him the exact skills he needed to write, record and play the album he was always destined to make. Through nine coarsely-delivered, poignant tracks, Rattie defies convention and situates himself as transcendent.

Buy your tickets to The Beagle Brothers with Chris Rattie & The New Rebels today!